My first $100 in balloon figure sales came from $10 in seed money given out to me along with several hundred others at a church, worship service.[/caption]

Every balloon professional has their own, unique story of how their balloon business began, but I suspect that the story of my beginning at church with $10 from the offering plate is among the most unusual of those stories.

Since I made that first balloon poodle for a friend in the hospital, I had enjoyed stretching, inflating, twisting, and stuffing balloons with all kinds of apparatuses and into all kinds of shapes.  Some were beautiful.  Some were ugly. Some were just weird.  But, all of them were fun. They made for great entertainment for my twin boys and they were a delight to most of my friends.

I did not imagine selling them, however, until I went with a friend to visit her church.  There I, and several hundred others, encountered a most unusual manifestation of the Parable Of The Talents and ten dollars in the offering plate for each of us. That occasion  turned my balloon hobby toward becoming my business MadeWithBalloons.

PARABLE OF THE TALENTS

There is more than one version of this parable in the Bible and more than one translation of each of them as well.  The basic story line, however, goes something like this:

I WAS SURE I WAS RIGHT

I had heard this story many times in the church community where I grew up.  Often it was associated with a request for money to be given to the church out of the church members' pockets.  I expected the same on this occasion.

When the pastor announced the need for more money for their building fund, then I was sure I was right.... ..   .

BUT, I WAS WRONG

But, I was wrong. 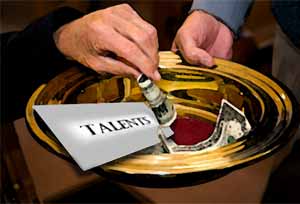 Instead of passing the offering plate around and asking every one in attendance to give more than usual of their funds to the church, the church passed out money from the building fund to everyone in attendance.  Even I, a stranger in the congregation, received one of the envelopes containing $10. These were the 10 talents each of us was to manage for the building fund for the next thirty days and then to return along with the proceeds at the end of the month.

Here I was, a stranger in their midst, and they gave me $10 in seed money to go out and multiply! I was amazed.

One person might just keep the $10. Another might simply put it in the offering plate later. Another might add it to a savings account to draw a few pennies in interest. Another person might choose to add their own money as a donation toward the building fund when the month is up.  I decided to accept the challenge and fulfill the mission by selling balloons.

Actually,I thought  my new balloon hobby was about the only thing that I might turn into a business with just $10 in capital.   I suppose I might have started a car wash like some of the teenagers were proposing.  Or I might have chosen to bake cakes as some of the women mentioned.   But, I was not so sure I wanted to compete with the kids for car wash customers.  And, I did not think my cooking merit badge from Boy Scouts twenty years earlier would qualify me as a professional chef.

GO FOR THE GOAL MadeWithBalloons™!

I was emboldened by the challenge and the sense of mission gained from such a worthy cause and by the trust strangers had shown in me.  This is before I mention that I now had a grand excuse to spend more time experimenting and playing with my favorite hobby; balloons.

All those experiments and balloon play make stories of their own for other days.  Suffice it to say, now, that at the end of the month I took back to the church $100 and change for the building fund. I had  earned it from that initial $10 in seed money by selling  sculptures MadeWithBalloons.

I learned, among other things, that I could sell balloons for a profit and that it felt especially good to earn money doing something that I really enjoyed.

I had been productive, accomplished a goal and brought benefits to others. Once again, however, the greater benefit was to me, because I had taken another important step toward my 30 plus years of  Making Things, Making Success And Making A Difference With Balloons on a professional level.